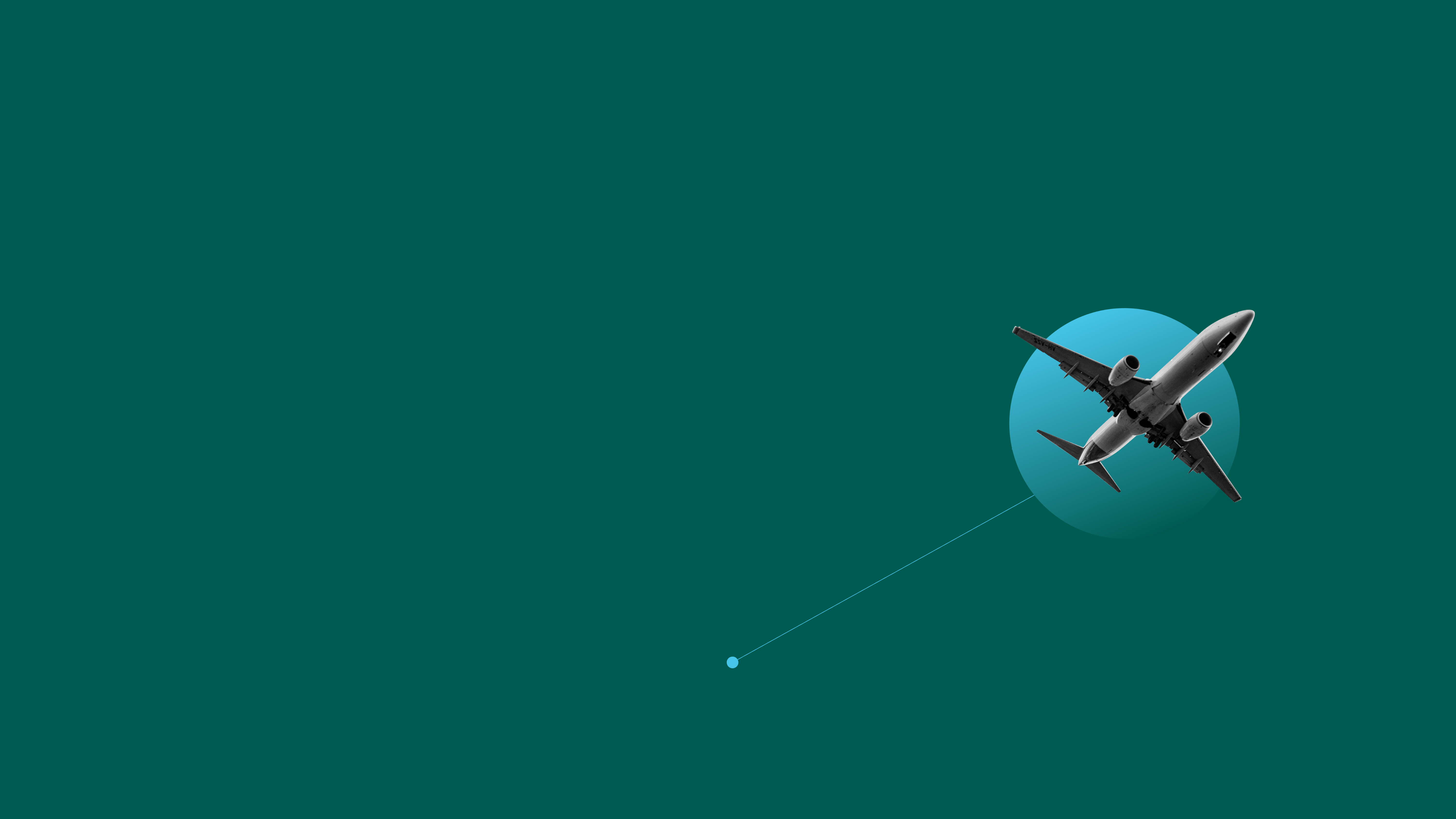 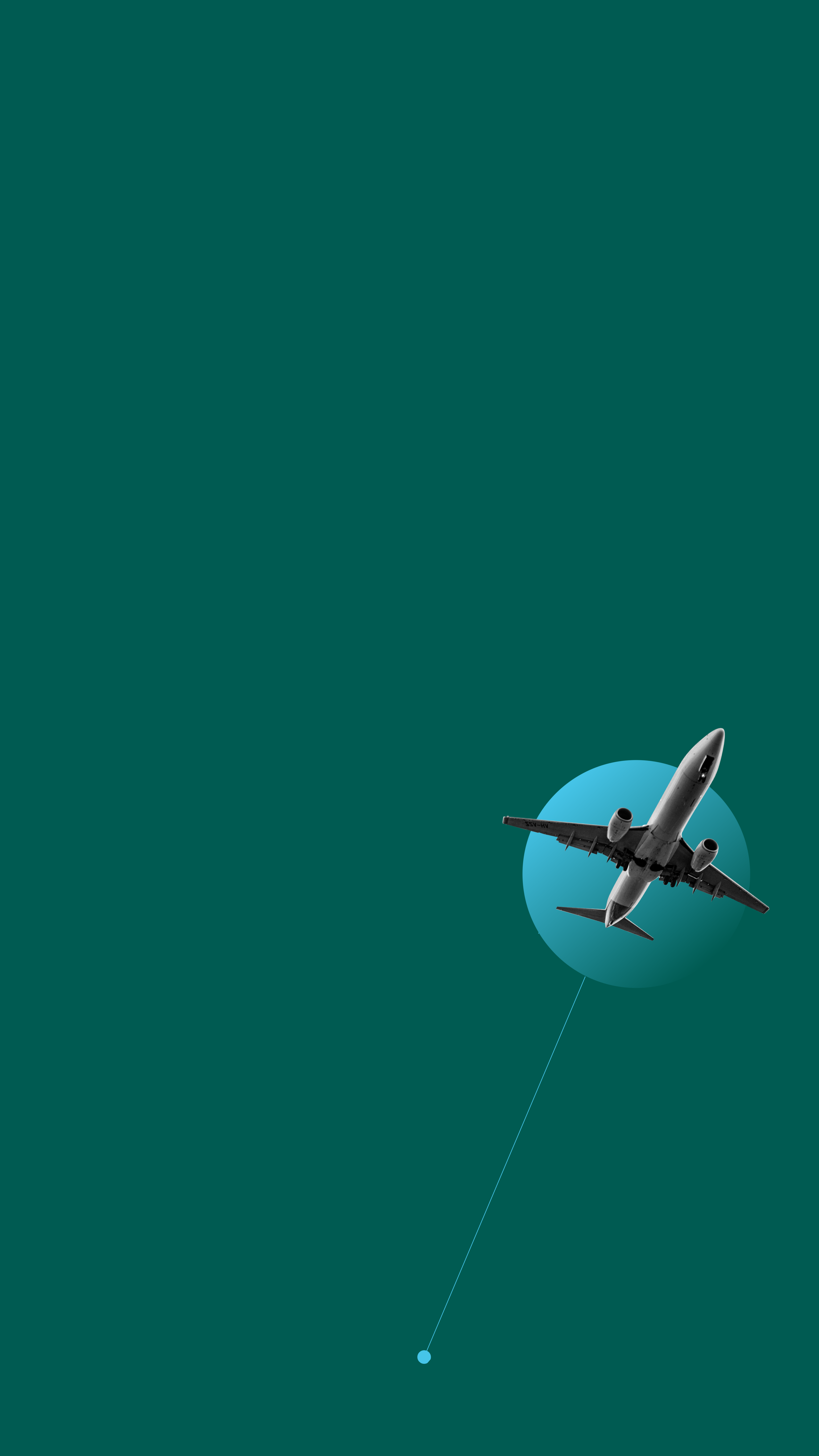 With Fly on SAF you can reduce your carbon footprint by replacing fossil fuel with SAF for your flight. Insert your travel itinerary and check out the possibilities.

What is the environmental impact of flying?
Currently, aviation is responsible for about 3% of CO2 (carbon dioxide) emissions. CO2 is a greenhouse gas that warms the temperature of the Earth and contributes to climate change. 3% may seem low, but as countries become wealthier, more and more people are choosing to fly. In fact, it’s predicted that aviation could consume 25% of the global carbon budget by 2050. The carbon budget is the amount of CO2 we can emit and still stay within the 1.5°C scenario, set by the Paris Agreement. Furthermore, aircraft emissions are released high in the atmosphere, which means they have a more potent impact on climate change.

What can I do to reduce the environmental impact when I fly?
The most effective way to act more sustainably is not to fly at all. Limiting your air travel by choosing other greener modes of transport is another option. However, when flying is essential, there is a solution available to reduce your carbon emissions. How? By choosing SAF (Sustainable Aviation Fuel). SAF is a renewable alternative to fossil jet fuel which can reduce lifecycle emissions of fuel by 80%. With our Fly on SAF tool, you can choose how much SAF you would like to contribute to in order to reduce your emissions. Changing your air travel habits can also make a difference. Some ideas are:

→ Travel as light as possible.

→ Fly economy rather than business class or first class (less space and weight).

→ Another excellent way of reducing the environmental impact: recommend SAF to your friends!

What action is the aviation industry taking?
It’s in the best interests of the industry to make flying more sustainable. That’s why they’re investing in cleaner aircrafts, more efficient operations, and SAF (Sustainable Aviation Fuel). However, currently, it’s generally voluntary whether travelers, organizations, or the aviation industry itself buy SAF to reduce their carbon footprint. We believe that governments need to act to ensure that we reach climate goals set by the UN for 2030 and beyond.

How are my flight’s CO2 emissions calculated?
Calculations are based on the ICAO Carbon Calculator from the United Nations. They also include indirect carbon emissions from the production, distribution, and transportation of fuel to improve the accuracy of the calculation. We are continuously updating our methodology to keep up with the latest scientific research. We welcome your suggestions to improve our service.

Why are my emissions higher if I travel in business or first class?
Business and first-class seats are generally heavier and take up more room. This means the carbon emissions attributable to you will be higher than traveling in economy.

What is SAF?
SAF (Sustainable Aviation Fuel) is a substitute for fossil fuel. It is produced from sustainable resources, like agricultural waste. SAF is known as a “drop-in” fuel because no changes need to be made to the aircraft or the infrastructure. Compared to fossil fuel, SAF can reduce carbon emissions by 80%, which will significantly lower the industry’s carbon footprint and dependency on fossil fuel.

What are the benefits of SAF compared to fossil jet fuel?
80% fewer emissions compared to fossil jet fuel is a pretty significant benefit. That includes direct and indirect CO2 emissions, from production, distribution, transportation, and combustion. Also, other emissions, like particulates and sulphur are reduced by 90% and 100% respectively. Using SAF will instantly lead to cleaner air. It’s as simple as that.

What is SAF made from?
SAF can be produced from a variety of sustainable resources, also known as feedstocks. This includes agricultural waste, used cooking oil, and industrial waste. We are also looking at forestry residues and non-biobased carbon as promising feedstocks for the future. SkyNRG does not allow the use of food crops, like soy and palm oil. They can be responsible for high rates of deforestation.

Is SAF the same as biofuel or synthetic fuel?
It all depends on what it’s made from. When it’s made from bio-based material, like used cooking oil, it can be called a biofuel. However, it can also be produced from CO2 captured from the air, which isn’t bio-based. Then it’s called synthetic fuel.

Is it safe to fly on SAF?
Absolutely. SAF meets exactly the same quality and safety requirements as fossil jet fuel. Over 300,000 flights have already been flown using SAF.

How do you guarantee that SAF is sustainable?
Our operations have been certified by the Roundtable on Sustainable Biomaterials (RSB), which is a worldwide initiative. Bringing together farmers, corporations, NGOs, experts, governments, and inter-governmental agencies concerned with ensuring the sustainability of biomass production. RSB is widely accepted as the “gold standard” of voluntary certification schemes. Furthermore, SkyNRG is advised by an independent Sustainability Board, which includes representatives from WWF (World Wide Fund for Nature), the European Climate Foundation, Solidaridad, and the University of Groningen. We also work with a global NGO network for the latest developments in sustainability.

How are my flight’s carbon emissions reduced by flying on SAF?
Even when flying on SAF, an aircraft engine still emits CO2. However, the sustainable resources used to produce SAF recycle the CO2 emitted previously. It’s the short time needed to recycle carbon emissions that makes the biggest difference.

What does the market for SAF look like?
It’s small, only 0.1% of global jet fuel is SAF. The problem is limited worldwide production. The expansion of production is crucial, that’s why SkyNRG is building the first dedicated European SAF facility in the Netherlands. The current limited production makes SAF more expensive than fossil fuel. It used to be as much as 15 times more expensive, but that’s now three to six times.

What happens with my financial contribution?
Almost all the money contributed goes to SAF and developing new SAF projects. We charge a small, fixed fee per transaction to build, manage and improve this platform. Your SAF contribution will be used by SkyNRG to deliver SAF in the coming months on a so-called ”Book and Claim” basis, a widely used system when SAF is not actually supplied to the aircraft of the person who made the contribution, but delivered to the fuel system of an airport close to the SAF production facility. The SAF is then tracked, verified and the carbon emission reduction is “booked” to the person that paid the contribution. That person can “claim” the carbon reduction. This has two important advantages:

1) Supplying SAF to the nearest airport minimizes carbon emissions and costs in the supply chain.

2) It is airline and location independent, as it allows air travelers to buy SAF based on their total aviation footprint in one transaction, rather than buying through each airline individually.

What do I pay for when I purchase SAF?
You pay for the CO2 reduction impact of SAF. SAF significantly reduces CO2 emissions compared to fossil fuel, but it is more expensive. This price difference is paid by you and an airline, so the total costs are shared and lower for everyone. As a result, you and an airline reduce your footprints at the same time.

Can I contribute to SAF whenever I want?
You certainly can. It doesn’t matter when you fly or who you fly with. All you have to do is enter your flight details in our Fly on SAF tool and we will take care of the rest.

Can I reduce my CO2 emissions from past flights?
Yes, you can reduce as many past flights as you want.

As a corporate traveler, is it possible to receive an impact certificate for my company’s Scope 3 GHG emission reduction reporting?
Yes. Please forward the invoice from your purchase (check your e-mail inbox) to info@flyonsaf.com, add your request and company name to the email and we will get back to you.

Can I track my impact?
Yes, you can see your personal impact in your MyCHOOOSE account, which you can access via the invoice you receive following your SAF purchase.

What is Fly on SAF and why should I use it?
Fly on SAF is a solution from SkyNRG and CHOOOSE. When you fly on SAF you can enjoy exploring the world more sustainably.

Who is SkyNRG?
Since 2009, SkyNRG has been building up SAF capacity and production for the industry to meet its 2050 net zero commitment. SkyNRG has supplied SAF to over 40 airlines across the world and is now developing dedicated SAF production facilities to support the transition from fossil jet fuel to sustainable aviation fuel. SkyNRG does not compromise when it comes to sustainability; we are a globally recognized Certified B Corp (TM), our operations are certified by the Roundtable on Sustainable Biomaterials (RSB), and we are advised by an independent Sustainability Board, as well as a worldwide NGO network to ensure we make the right sustainability decisions across all of our operations.

What type of SAF projects is SkyNRG involved in?
We need to find new and better ways to produce SAF, which is why we are involved in many new projects. To find out more, click here.

Who is CHOOOSE™?
CHOOOSE™ is a leading climate-technology company headquartered in Oslo, Norway. Together with its ecosystem of industry partners and individual supporters, the CHOOOSE platform is accelerating access and adoption of climate solutions across a range of key technologies – from nature-based solutions to carbon removal to Sustainable Aviation Fuel.